Singer-songwriter, meditator, dancer, dreamer. Those are some of the many monikers attached to Memphis-native Valerie June, yet they all, individually and collectively, fail to capture her true essence. She's elusive that way, existing with her feet on the ground and her head in the clouds; a magical conduit between the various planes of creativity. Never has this been more musically apparent than on her new album, The Moon And Stars: Prescriptions For Dreamers. From the opening tickles of piano to the closing bird songs, June does what only she can do - take listeners on a fanciful flight through moments of a life that's forever in motion.

The same can also be said for any conversation with June. When rummaging through the ideas and emotions expressed in her songs, she has a way of making the earthly ethereal and the elusive attainable. Let's face it; not every artist can so seamlessly go from talking production to explaining oppression, but Valerie June does so with grace and humor - all while munching on a clementine.

Now, I know you a little, but even if I didn't, just based on this project I'd go out on a limb to say that you subscribe to the notion that we are spiritual beings having a human experience, rather than the other way around, right? When did that idea first take hold of you and what does it mean to you?

It always was there. I was raised in the Church of Christ, so it was always there. You always think that way when you're raised that way.

Is that why things like gardening, dancing and songwriting are so important to you? To keep a connection with something greater and outside of yourself?

Tell me if this is true for you, too - I'll be in a great groove with eating well, exercising, meditating, hiking - doing everything right and feeling great. Then, one day, out of nowhere, it's all gone. We have to continually cultivate that connection to our best selves, but we also can't shame or berate ourselves when we lose it, right? How do you navigate both sides of that?

Well, on those days when I'm spinning, what I have to do is watch myself. Just be detached totally and just watch myself move around the room. Like, "Look, I'm gonna stay over here while you go through all that crazy shit." During meditation, that's what you do - you observe, watch, notice. You notice as if you're outside of yourself. So, on those days when it's heavy (and I get a lot of those days), I already have the practice of my gardening, my dance, my music. I can say, "OK, just 10 minutes of this, 10 minutes of that." I have to break it down into small bits. 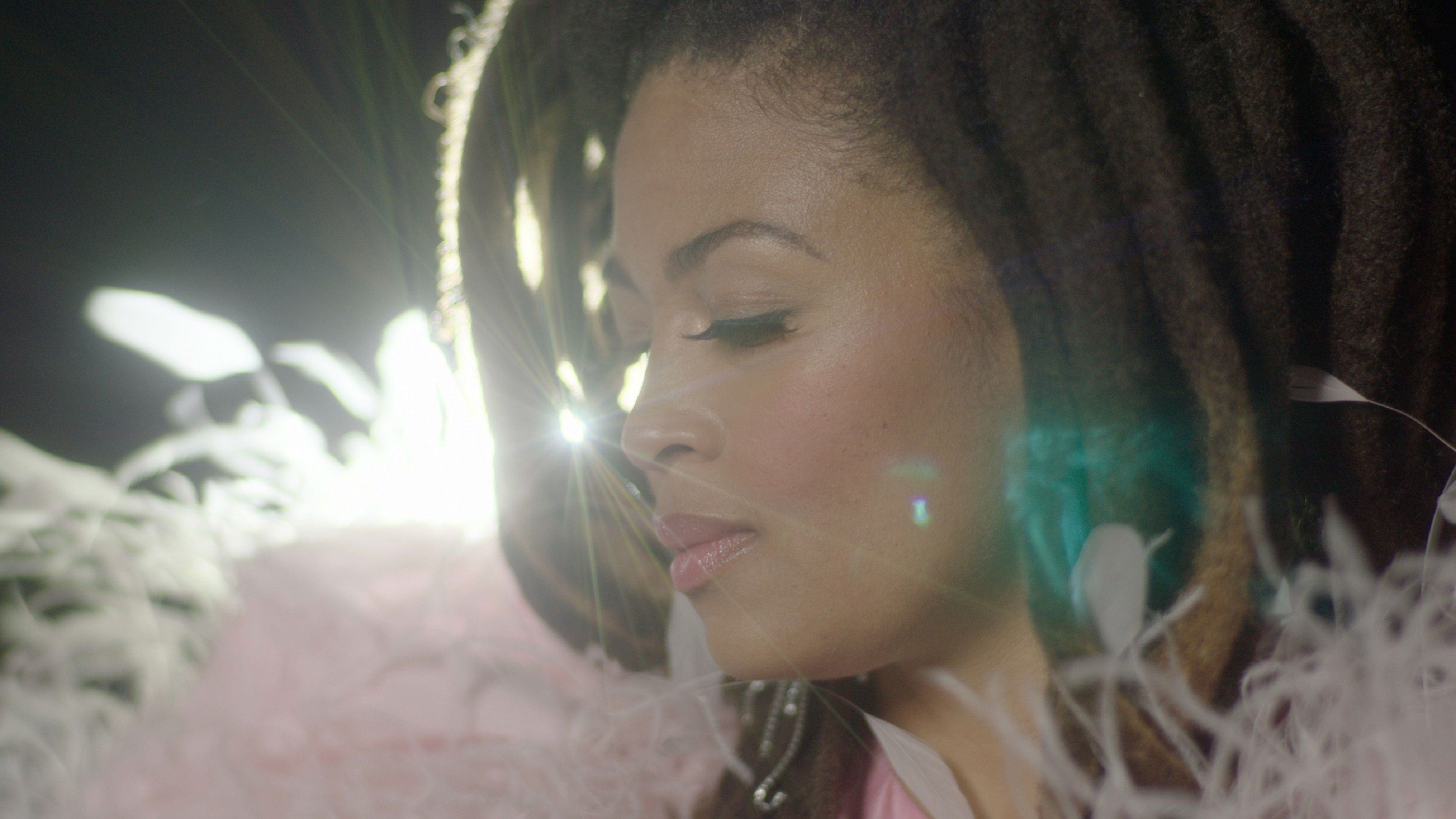 Let's talk about your new record. You co-produced it with Jack Splash, and y'all used a bunch of different textures and colors to build this thing. Do you hear production ideas when you're writing? Or do you go into the studio with a totally blank canvas? What's your process?

Well, I hear voices; layers and layers of voices. So, working with Jack was really cool, because he put me with musicians that I could hum the voices to. Also, because he's such an amazing producer, he was able to say, "I think that is going to be best translated as a horn or as a flute". Sometimes I'll hear instruments, but I usually just hear layers of voices. So I hear the whole song, but not the exact texture that's going to make it happen.

Things were a little bit different with this record, as I had to work with the computer, learn how to use beats and find the sound that I was looking for digitally. That helped a lot because sometimes, when I'm with musicians, I’ll say something like, "I want to hear something cloudy, like a thunder drone". I don’t write music, so they have to try to figure out what I'm even talking about with a ‘thunder drone’. But when you're able to just go over to the computer and mimic the sound and they can hear it, that's way better.

Even though y'all fold new elements in, it still feels like a natural artistic step after The Order of Time, which expanded upon Pushin' Against a Stone. Are you someone who listens to lots of other music to gather up ideas and inspirations for where to go next, or is it more intuitive than that?

I guess it kind of is more intuitive, but I listen to the world. There’s a quality to some things I hear that I like something about - I might not like the whole thing, but I’ll like something about it. I collect a little information of what I like, and I say, "Well, OK. What if that was something we could try?". Jack is one of those people who sees the world like a kaleidoscope, and instead of saying to me, "Oh, no, no, no, no, that's definitely not something we're going to try”, he was open. So it was really fun to try new things and expand.

Let's dig into some specific songs and their messages, because there are a lot of life lessons tucked into this thing. Right off the top, you lay out the loss of a love, but you do so by embracing beauty rather than bitterness. Like the line in ‘You and I’; “When the love left just a friendship / that’s when we found our greatest gift.” That particular tango takes two, though, doesn't it? Both sides have to be willing to embrace that.

Always. We have something now, but we won't have it one day. So we're constantly in need of making that friendship with everything we adore; when we do it with humans, it's all much more special. Even with yourself - just befriending that side of yourself and knowing you're going to have those hard days but loving all of it - that ugly stuff, too.

For sure. That's a good segue because, in ‘Colors’, you sing; “Count my wrongs and multiply them / by the rights to justify just what I feel inside.” I hear that as a countenance to not shame or berate ourselves for taking missteps, but to rather keep on bringing our best to every moment. Am I close?

It's true. That's what it is. What I think we end up having to do, no matter what, is take one moment at a time. Yes, we are going to make some wrong moves. We're going to fail. We're going to fuck up, that's going to happen. But you just dust off and say, "Well, what are the colors of this day? What is happening here to bring vibrance and life to this particular moment of my life and the area where I'm at today?"

All the threads tie together on this record because ‘Call Me a Fool’ speaks to taking the chance and chasing the dream, because it's better to be a fool who tries than a coward who regrets, right?

Exactly. It's better to take the leap, fall and totally mess up, than to look back and be like, "Well, I didn't even try. I didn't even try to do anything." you're on your death bed and you're just like, "Man, I wish I would've."

"If you let someone take your joy and your smile, then they have control over your fear and your self"

A totally different topic you tackle is the resilience of the Black community and the practice of joy in the face of oppression. Cultivating joy is resistance; it's self-care. While it is to restore your internal fortitude, is it also to prevent the weaponization of your emotions by external forces?

It's the weaponization of internal power, yeah. That's exactly what I'm talking about. If you let someone take your joy and your smile, then they have control over your fear and your self. Your spirit is where your dreams and creativity live - if they have that, they determine what your future is going to look like. But despite it all, you've got to just be able to live in that space of joy.

You think of the spirit of John Lewis, and even to the day he died, it was a loving spirit. You weren't going to take that from him. Someone like Carla Thomas has seen all these things happen in Memphis - the assassination of Dr. King, the racism and heaviness of gun violence within our communities - and she's still a joyful being. So, when I look to others and I see them with the joy, I'm like, "I'll be all right."

Every time I see Mavis Staples, I think that. If she can live through all of the things that she's lived through and still radiate nothing but joy and love, then I really need to get my act together. She's a walking lesson.

Exactly. Great example. She's seen it all and even walked beside Dr. King.

Years ago, I went through a world music phase, so the guitars in the first half of ‘Stardust Scattering’ remind me of some of my favorite songs by Geoffrey Oryema and other African artists, but updated by a Memphis native. In a way, that sort of sums up this whole project — ancient ideas in a modern moment. What do you think?

I think that is exactly it. I love how you said it, because that's what we wanted to do: "How do we take my twangy voice and marry it with modern sounds? How can we have multi-dimensions and multi-eras all in one record that’s iridescent and stardusty and reminds them that there's magic, even though we're getting old? How do we do all of that in one record?"

When we work with these ancient sounds of ancestors and just let them move through, we'll never say it the way they said it because everything you do is already done before. Your own voice saying it is the only thing new about it. So it is the same old thing, but it's coming out in who we are today with what we have at our fingertips.

The Moon And Stars: Prescriptions For Dreamers is out now via June Tunes Music.